In 2007, Frank Smith, a retired secondary school visual arts teacher in Toronto and a well-known local artist, travelled to Tanzania as part of a Rotary International group, helping to rebuild and renovate schools and hospitals. At the same time Frank couldn’t help but notice the problems being faced by the local children of school age who in many cases were being cared for by relatives, having lost one or both parents to HIV/AIDS.

Frank returned to Tanzania in early 2008 with Rotarian Lynn Bird. Their aim was to get local children to create art that would describe their dreams for the future. Thirty children took part in the initial project in the Kilema and Marangu West area at the foot of Mount Kilimanjaro. In every case the child wanted to finish school and engage in jobs within their community.They wanted to be doctors, teachers, nurses, bus drivers, store owners and farmers. They all had dreams of helping themselves, their families and the community.

Following the inspiration of Frank Smith, Ken Wall introduced the concept to friends and colleagues in Australia, and through the Rotary Club of Templestowe, Melbourne, Australia, ABCD: Art Building Children’s Dreams (Australia) Inc. was created in late 2009. 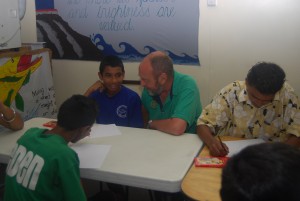 The first Pacific Island pilot project was conducted by Ken in Suva, Fiji, in early August 2009. Thirteen children in significantly at-risk and disadvantaged circumstances created beautiful pictures, showing similar dreams and aspirations to the children in Tanzania. The ABCD drawings, photographs and the children’s compelling, personal stories are combined as unique works of art used to promote the program. At the conclusion of the pilot program in December 2011, 38 children were able to attend school as a result of ABCD support.

From 2012 to June 2013, eight new ABCD projects in remote parts of Fiji have been adopted by various Rotary Clubs in Australia. Over 160 children have been sponsored and we have built two new pre-schools at Lavena and South Taveuni. This has been made possible by some fantastic new partnerships and the support of a huge number of people and organisations. And this is just the beginning…!

Our aim is to replicate the ABCD projects as far and as wide as possible, so that more and more children around the world can afford the education that could provide the key to their future – and the future of their families and communities.

The vision of ABCD: Art Building Children’s Dreams is a world where vulnerable children can achieve their dreams. ABCD Australia is an International Project of the Rotary Club of Templestowe, Melbourne. We raise funds to help children in Asia-Pacific complete their education.

ABCD Australia is an International Project of the Rotary Club of Templestowe, Melbourne. Our work would not be possible without the generous support and encouragement of a number of other Rotary Clubs as well.

ABCD Australia is an International Project of the Rotary Club of Templestowe, Melbourne. We raise funds to help children in Asia-Pacific complete their education.